a) Qualification of teacher.

b) Personality of teacher.

2. Which of the following is not characteristic of good question paper?

c) No use of vogue words.

3. Which of the following is a project aid?

4. Moral value can be effectively inculcated among the students when the teacher

a) frequently talks about value.

b) himself practice them.

c) talk to Gods and Godesses.

5. Good evaluation of written material should not be based on

c) ability to reproduce whatever is read.

6. Maximum participation of students is possible in teaching through

7. A researcher divides the population into P. G, Graduates and 10+2 students and using the random digit table he selects some of them from each. This is technically called

a) research carried out prior to the incident.

b) research carried out after the incident.

c) research carried out keeping in mind the possibilities of an incident.

9. A lottery method is an example of

10. In descriptive research, the primary data can be obtained through

b) direct communication with respondents in one form or another.

d) All of the above.

11. The meaning of randomisation is

a) each element of population has an equal chance to be included in the sample.

b) the selection of individuals from population is independent.

c) the method is free from personal bias.

d) All of the above.

12. The laws of induction were given by which of the following thinkers?

13. A disruption in the communication process is called

17. Educational TV was first introduced in India in which year?

18. Who differentiated between hot and cool media?

19. Please find the number in place of Question Mark in the following series.

20. In a school 391 boys and 323 girls have been divided into the largest possible equal classes, so that there are equal number of boys and girls in each class. What is the number of classes?

21. Which number indicates the owners who are neither engineers nor good administrators? 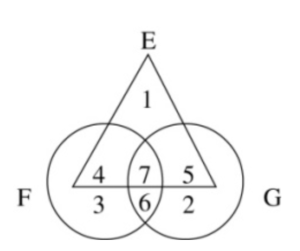 23. In the series given below, identify the wrong number.

24. In certain code TEACHER is written as VGCEJGT. The code of children will be

25. Which of the following statements are correct about the Central Information Commission?

1. The Central Information Commission is a statutory body.

2. The Chief Information Commissioner and other information commissioners are appointed by the President of India.

4. It can punish an errant officer. Select the correct answer from the codes given below:

27. We need not worry about errors but we must try to learn from our errors.

I. Errors may take place when we are carrying out certain work.

II. We are capable of benefitting from the past and improve our chances of error free work.

a) if only assumption I is implicit.

b) if only assumption II is implicit.

c) if both I and II are implicit.

d) if none of them are complete.

28. The first two terms are related to each other in some way. Mark one of the options A–D to identify which term will bear the same relationship with the third term given in the problem

29. Which is the 8th letter to the right of 15th letter from your left in the English alphabet?

30. When I found that I was half an hour earlier than the scheduled time of the train, the train being late by   1-30 hours, arrived at 6-20 hours. I had reached the station at:

Direction: Yearly income of three men and two women is given below in the table. Read the figures and answer the questions 31–34.

b) Ajay’s and Abhay’s both.

c) Ranjit’s and Sarita’s both.

32. What is the ratio between the total income of men and that of women for all years?

33. What is the average income of a woman over four years?

34. The average income of a man over those four years is

Direction: Study the following Pie-diagram carefully to answer the questions that follow: 35–38. 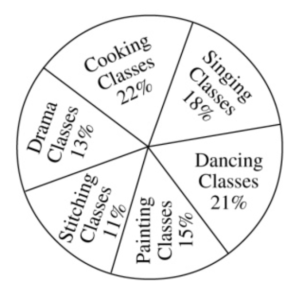 (Percentage of students enrolled in different Hobby classes in a school.)

35. What is the total number of students enrolled in stitching and drama classes together?

36. How many students are enrolled in painting classes?

37. What is the ratio of number of students enrolled in singing and dancing classes together to those enrolled in drama classes?

38. How many students are not enrolled in cooking classes?

39. Information, a combination of sound, video, text, graphics and animation is called

d) Memory made of Organic Materials.

b) Thick and thin lines.

42. A group of people has access to computers and internet, while another group does not have access. The difference between the two groups is known as the

43. Group of instructions that directs a computer is called

44. The Institute where and when the first computer installed was

a) Indian Institute of Science, Bangalore, 1950.

45. What is the Kyoto Protocol?

a) A UN resolution with a goal of increasing food production.

b) An international treaty with a goal of saving endangered species.

c) An international treaty with a goal of reducing major green house gases.

d) An agreement among members of the World Trade Organisation to ensure free trades among participants.

46. Which natural disaster causes more deaths than any other?

47. Which one of the following units is used to measure intensity of noise?

48. Match List-I and List-II and select the correct answer using the codes given below:

50. Of the following gases, which is the most responsible for global warming?

51. Who was responsible for beginning of English education in India?

52. Who suggested that the aim of education should be to develop values, like fearlessness of mind, strength of conscience and integrity of purpose?

53. The award given by the Council of Scientific and Industrial Research for important contribution in any field of science is called the

54. Match List-I with List-II and select the correct answer from the code given below:

55. The Indira Gandhi National Open University came into existence in

Read the passage and answer questions 56–60.

Read not to contradict and confute, nor to believe and take for granted, nor to find talk and discourse, but to weigh and consider. Some books are to be tasted, others to be swallowed, and some few to be chewed and digested; that is, some books are to be read only in parts; others to be read, but not curiously; and some few to be read wholly, and with diligence and attention. Some books may also be read by deputy, and extracts made of them by others; but that would be only in the less important arguments and the meaner sort of books; else distilled books are like common distilled waters, flashy things. Reading maketh a full man, conference a ready man and writing an exact man. And therefore if a man write little, he had need have a good memory; if he confer little, he had need have a present wit; and if he read little, he had need have much cunning to seem to know that he doth not.

56. What does the art of writing do to man’s character?

a) It makes him a full man.

b) It makes him a ready man.

c) It makes him an exact man.

d) It makes him a good author.

57. What should be the real object of reading?

a) To distil the contents.

b) To understand author’s views and their application in day-to-day life.

c) Not to contradict and confute.

d) To weigh and consider.

58. What can be done with regard to the ‘meaner’ sort of books?

a) To be read but not to contradict and confute.

b) To be read only in parts.

c) They can be ‘read by deputy and extracts made of them by others’.

d) To be read, but not curiously.

59. If a man reads very little, what must he pretend?

a) He must pretend to have a good memory.

b) He must pretend to know a lot.

c) He must pretend not to have good memory.

d) He must pretend to be wise and witty.

60. Which of the following words suitably replace the word ‘confer’ used in the above passage?